Apple is marking Black History Month by offering users a wide variety of content, to amplify creators and businesses across its various digital storefronts and services, as well as offering a limited edition Apple Watch band.

Throughout February, Apple will be showcasing Black-owned businesses, developers, apps, content, and social justice apps, as part of a number of initiatives it is implementing to mark the month.

In the App Store, the Black History Month Hub will list both apps and stories revolving around the topic. The stories will feature Black developers from developers including ustwo games and Zynga, and will also discus the importance of representation.

Apple Music subscribers will be able to listen to a month-long experience that highlights musicians in jazz, blues, soul, gospel, R&B, pop, and hop hop. Curated playlists, essays, original videos, and other items will be offered from Black influences, musicians, authors, and directors.

Original artwork from collage artist Rob Lewis was commissioned for the service, to visually combine music programming with the culture.

The Apple TV app’s “Essential Stories” theme for the month will cover the multidimensionality of the Black family and onscreen representation. This will include the “Essential: Stories that Honor Black Families” collection, complete with original art from Jon Key, with a focus on iconic families and stories of motherhood and fatherhood.

The “Caste: Part 1” and “Caste: Part 2” episodes of “The Oprah Conversation” will be available to view for free, alongside a free discussion guide on Apple Books and the Oprah’s Book Club podcast on the book.

Apple News will feature the best journalism on race in America under curated topic groups. An Apple News+ Spotlight collection will compile audio articles about the Black experience, while the Racial Justice Spotlight will collect together items on anti-racism, mental-health resources, and other ideas to serve communities.

Apple Podcast listeners will be able to listen to shows from a variety of Black voices, including Michelle Obama, Joe Budden, Phoebe Robinson, and Baratunde Thurston. A collection of shows offering interpretations of Black families is also planned, as well as a promotion of Virginia Public Media’s “Seizing Freedom.” 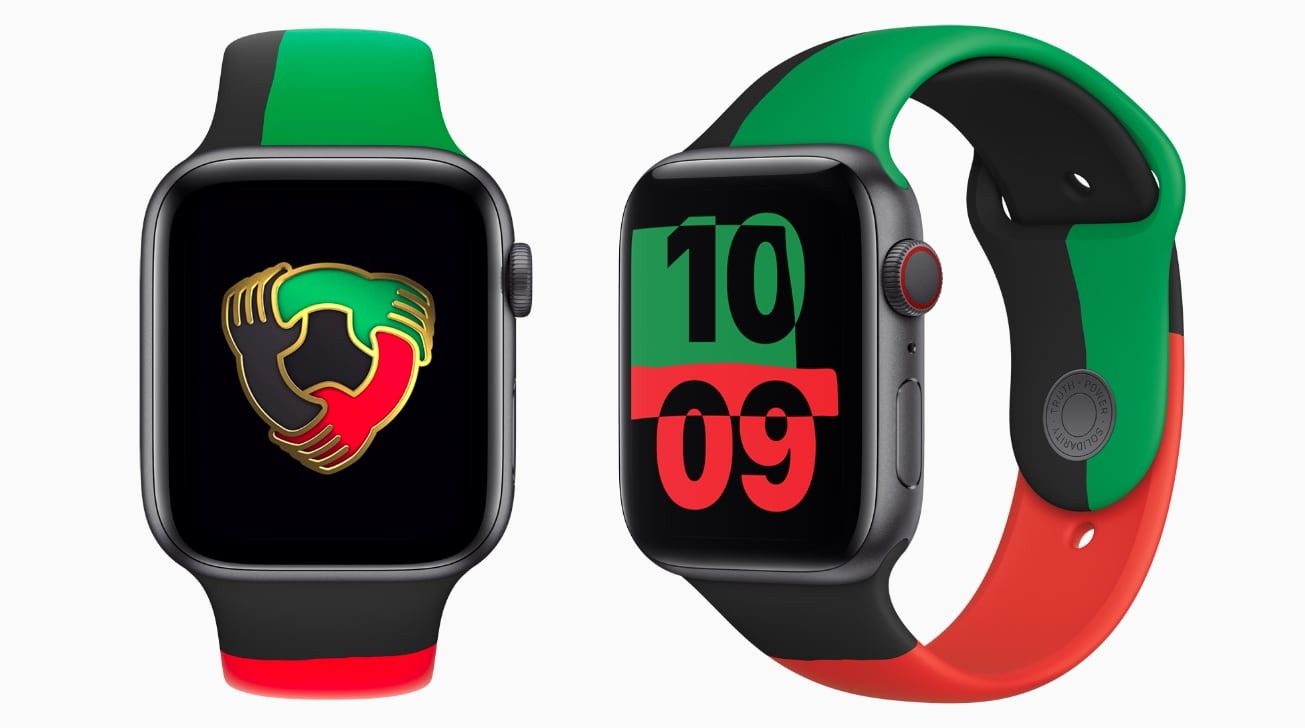 As well as services, Apple is launching the Black Unity Collection for the Apple Watch, including a limited-edition Apple Watch Series 6, Sport Band, and Unity watch face. The sport band, made from fluroelastomer and using the colors of the Pan-African Flag, is engraved with the words “Truth. Power. Solidarity” etched on the interior of the fastening pin, and will be available from February 1.

Apple Fitness+ will include themed workouts that feature Black artists across multiple workout disciplines. Trainers will also feature individual songs and pay tribute to the month. The first Time to Walk episode for February will feature author Ibram X. Kendi, and will reflect on resiliency and racial justice.

In partnership with the It’s Nice That design group, Today at Apple will host New World, a program of virtual sessions and tutorials exploring creativity and how it could be used to bring about change. This will include curator and writer Kimberley Drew moderating sessions featuring Black creatives talking about inspiration, such as typographer Tre Seals, filmmaker and photographer Joshua Kissi, and visual artist and photographer Shan Wallace.

The Shot on iPhone campaign “Hometown” will include the work of more than 30 Black photographers, commissioned by Apple to take imagery of their own “Hometown.”

kinda starting to get tired of this.. : AppleMusic