Apple and Facebook have been in a very public spat over the course of the last few months as Apple dials up its pro-privacy stance. The two companies have long had tension, more recently however Facebook is taking shots at an upcoming iOS and iPadOS feature that will require apps and data companies such as Facebook to ask for users’ permission before tracking them across other sites and websites. 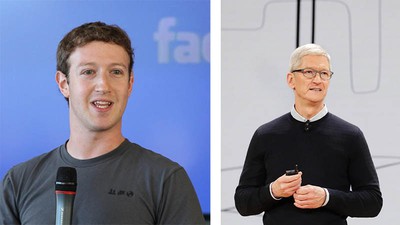 While for the most part, the war of words between the tech titans has remained professional, Mark Zuckerberg and Tim Cook have also shared a barrage of attacks towards each other. During an interview in 2018 in the midst of Facebook’s notorious Cambridge Analytica scandal, Cook was asked how he would lead Apple if it were to face a similar crisis. Cook responded by ruling the hypothetical situation out of the question, saying Apple would not be in the situation Facebook was in, thanks to its differing stance on privacy and user data. Zuckerberg shot back, calling Cook’s comments on TV “extremely glib” and “not at all aligned with the truth.”

Zuckerberg, outraged by Cook’s comments and public influence on Facebook’s reputation, reportedly told internal aides and team members that Facebook needs to “inflict pain” on Apple, according to sources who spoke on anonymity to The Wall Street Journal. Last month, during the company’s earnings, call Zuckerberg called Apple an increasingly bigger threat to Facebook and accused the Cupertino tech giant of using its platforms to interfere with how Facebook operates its own apps.

The day after the public comments, Cook responded indirectly in a speech during the Computers, Privacy, and Data Protection conference where he condemned Facebook and implied that its business model of maximizing engagement leads to division and violence. During the same speech, Cook censured Facebook’s potential role in the January 6 Capitol riot, blaming the social media company’s algorithms for spreading conspiracy theories.

In December, Facebook ran full-page ads attacking Apple’s up-and-coming ATT or App Tracking Transparency requirement that will force apps to ask for the user’s permission before tracking them across apps and the internet. Facebook is attacking Apple from the standpoint that ATT will hurt small businesses who rely on personalized ads derived from effective tracking. In response, Cook directly weighed in on Twitter, stating that Apple simply wants to give users a choice about whether they wish to be tracked or not.

Despite the personal jabs and attacks, in a statement given to The Wall Street Journal, Facebook spokeswoman Dani Lever refuted the idea that the tension between the two is personal, suggesting instead that it was “about the future of the free internet.” Facebook states that choosing between tracking users for personalized ads and protecting their privacy is a “false-trade off,” claiming that it believes it can provide both. The spokeswoman reiterated past remarks by Facebook stating that Apple’s privacy features are not meant to preserve user privacy, but are instead about increasing profit, and that Facebook will join others to highlight Apple’s “self-preferencing, anticompetitive behavior.”

Facebook is reportedly planning to take its disapproval with Apple to court as it’s allegedly been preparing to file an antitrust lawsuit against the Cupertino-based tech-company over its “unfair” approach to privacy with ATT and iMessage. As part of its lawsuit, Facebook is considering partnering with other companies such as Epic Games, which is already embroiled in a massive legal battle with Apple to propel its antitrust case forward. Facebook may however scrap its plans to bring forward any form of legal action against Apple.

Senator Mike Lee of Utah, who leads the Republican’s effort in the Senate antitrust subcommittee, told The Wall Street Journal that the feud between Apple and Facebook sits at the “nexus of privacy and antitrust,” and that he doesn’t want to “impose regulation that just ends up protecting incumbents and entrenching monopolies.”

Apple has committed to launching ATT with iOS and iPadOS 14.5 in the “early spring” and Facebook has seemingly admitted defeat in its failed attempt to stop the new requirement from going into action. Apps have the freedom to customize the prompt that users will receive asking for their permission to be tracked across other apps and the web, and screenshots of Facebook’s prompt for its iOS app pleads with users to opt-in to tracking in order to receive “a better ads experience.”

Note: Due to the political or social nature of the discussion regarding this topic, the discussion thread is located in our Political News forum. All forum members and site visitors are welcome to read and follow the thread, but posting is limited to forum members with at least 100 posts.

On Valentine’s Day, watch out for romance scams on Facebook and dating apps

Online Fashion on the App Store

Just in time for the HBO Apple TV Channel to shutdown, HBO Max no longer supports logging in through your Apple ID, and it may have potentially deleted your HBO Max account along with it. : appletv