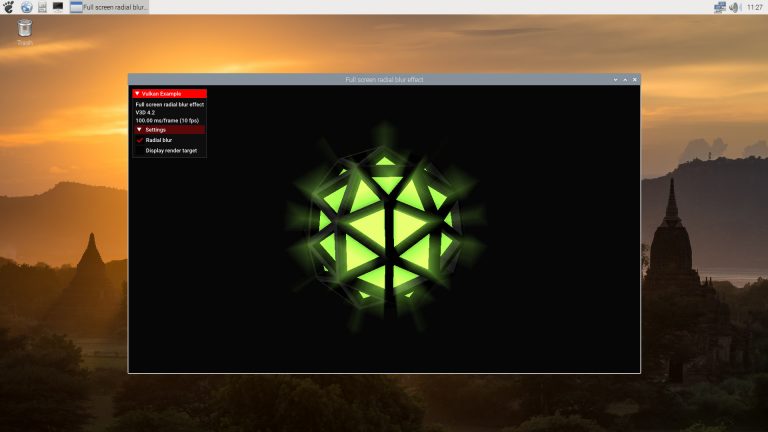 Vulkan 1.0 conformance has now been demonstrated on a Raspberry Pi 4. You can see the official recognition here. (Vulkan is a realtime 3D graphics API, maintained by Khronos, which is aimed at video games and interactive media, for those not familiar with it.)

The details of the Compatibility Test Suite (CTS), of the Raspberry Pi 4 Model B, are listed as:

It was earlier this year, in June, that progress was flagged in a post on the foundation’s blog. And it had been further back in January that work started on what is apparently a much requested Pi feature: an open-source Vulkan driver.

Another milestone for Vulkan on Raspberry Pi: the V3DV Vulkan Mesa driver for Raspberry Pi 4 has demonstrated Vulkan 1.0 conformance.

And as you can see in the tweet above, the Spanish-based Igalia – an open source consultancy – is credited with the work.

Khronos describes the conformance process as a way to ensure that its standards are consistently implemented by multiple vendors, so as to create a reliable platform for application developers. For each standard, Khronos provides a large conformance test suite (CTS) that implementations must pass successfully to be declared conformant; in the case of Vulkan 1.0, the CTS contains over 100,000 tests.

There is still further to go, however. Ebden finishes:

Vulkan 1.0 conformance is a major milestone in bringing Vulkan to Raspberry Pi, but it isn’t the end of the journey. Our team continues to work on all fronts to expand the Vulkan feature set, improve performance, and fix bugs.

Read the full post on the Raspberry Pi blog.

And the place to keep an eye on the standard is www.khronos.org.

Drone sets sail for eye of the hurricane