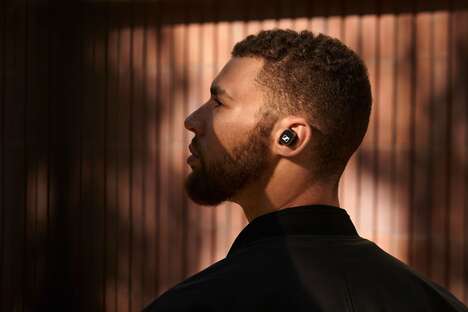 Traditionally, the purchase of headphones required buyers to consign themselves to the audio quality and sound design crafted by the manufacturer, while customizable options typically were only available to a privileged few at the ultra high-end price range, but Sennheiser has managed to boldly shake up the market with the introduction of touch control headphones that are wireless, stylish, comfortable and whose sound can be fine-tuned with the help of a companion smartphone app.

You don’t have to be a technically gifted audiophile or generalized gadget geek to be able to explore the sonic possibilities offered up by the Sennheiser Smart Control app, which works in conjunction with the CX 400BT Tru Wireless touch control headphones as well as other Sennheiser offerings. Simply pair app and device and use the app to alter the EQ to your liking, with visual curve and slider options making it easy for you to understand the changes you’re making. What’s great about the app feature is that it allows you to make presets so you don’t have to constantly open up the app to fiddle with the settings depending on the kind of music you’re listening to.

In many ways though, the Smart Control app is the definition of a true luxury in that you’d still get massive enjoyment of the CX 400BT Tru Wireless touch control headphones without that extra toy. Fitted with purpose-built audio drivers, these headphones provide a top-notch sound signature that Sennheiser notes is reminiscent of that associated with the widely lauded Momentum True Wireless 2 headphones. That means a searingly clear treble, balanced mids and bass that’s warm and deep rather than clunky and rattled.

What’s more, the crystal-clear sound remains consistent regardless of genre or volume, so you can pump up the volume without fear of distorted lows demolishing your eardrums. Tracks with dominant kick drums for example sound accurately punchy, while bass-heavy electronic tracks foster a subwoofer-style drive without sounding like they’re being played at a nightclub down the street. Vocals, whether cleanly sung, rapped or even death-growled, sound magnificently clean. If you’re not a fan of classical music, the CX 400BT Tru Wireless headphones might just convert you, with sumptuous high-pitch piano, violin and strings that will draw you into a state of trance.

From Miles Davis to Metallica and Beethoven to Biggie Smalls, every genre of music sounds true to its artist when enjoyed through the CX 400BT Tru Wireless headphones. Features such as passive noise cancellation and a battery life of 7 hours on a single charge – 20 hours in total with the compact charging case – only add to the listening enjoyment of these headphones.

Musical immersion aside, the CX 400BT Tru Wireless headphones also deliver on overall convenience and functionality with highly intuitive and easy-to-use touch controls. While other wireless headphones have offered touch control features, they haven’t captured the imagination of consumers with good reason, but the CX 400BT look poised to change that with its simplicity. A single tap on the left earbud controls playback, a double tap rewinds, and a double tap on the right ear skips forward. Volume can be adjusted by pressing and holding either earbud. As if that weren’t great enough, you can even use the aforementioned smartphone app to create custom tap commands which, by the way, don’t merely apply to music controls but also to call management and voice assistant functionality.

Available in black and white options for only $129.95, the Sennheiser CX 400BT Tru Wireless touch control headphones are an absolute steal in the manner in which they provide spectacular sound quality, the convenience of EQ customization through an app, touch control and battery life, all in a sleekly stylish and comfortably ergonomic package.

These cool yoga gadgets will help you completely relax your mind, body, and soul » Gadget Flow

Which office chair should you buy for your workspace?—kinetic structures, modular designs, & more » Gadget Flow